This old neo-renaissance palace, known as “Palazzo di Fiori”, with a basement, ground floor and two upper floors, located in Avenue “B” and Tenth Street in the Old Quarter of Panama City, was built in the late 19th century, as the historical map “Panama City and its outskirts” (dating back to 1890) shows for the first time the plot of land and the house, as well as an 1890 public deed certifying that Dona Mercedes Diaz de Garay, wife of renowned painter Epifanio Garay, was its owner.

Already since the late 19th century it was known that the house was made of “…stone masonry, wood, and roof tiles, located between Carrera de Paez (now Avenue “B”) and Carrera Rivas (now Tenth Street)…”, and it already featured the current “C”-style configuration with a central inner courtyard.

Likewise, the façade erection plans in the Old Quarter (prepared by architect Carlos Flores Marini for the Organización de Estados Americanos during the 1970s) recorded the building’s frontal façades, showing guttered zinc roofing (it appeared as if the original tiles had been removed), partial bossage on the walls, openings with semicircular arches (and others with a flat lintel), elaborate iron work on the balconies, and neo-classical details that gave it all its value. It is worthy of mention the uniqueness and size of its main staircase, partially spiral-shaped, built from reinforced concrete, with solid wood steps and a wrought iron handrail. In addition, the archeology works conducted allowed the discovery of features such as a semi-tunnel (or hallway) with a barrel vault (made of clay bricks); the original 19th-century courtyard passageways and levels; and the head of an old water well.

With all this information, the survey plans and the intervention proposal were launched, the latter of which intended, from the beginning, to preserve and highlight the property’s historical and architectural attributes all in the framework of a project that included three parking spaces on the basement and nine apartments distributed among the ground floor and two upper levels, with the incorporation of a new mezzanine (level 250) and a new partial terrace/roof (level 300) hidden below the existing roof, and from which panoramic views of all the Historic Center can be appreciated.

The enormous main spiraling staircase was preserved and restored following its original design and without altering its structure or its associated elements, recovering its original splendor. Likewise, the central inner courtyard was released from a series of clashing elements and partially redefined, making it more coherent and elegant, which has allowed for better concordance with the outer façades. Finally, the building’s common circulation patterns were kept and highlighted, as well as the archeological features that were found and the property’s architectural details. 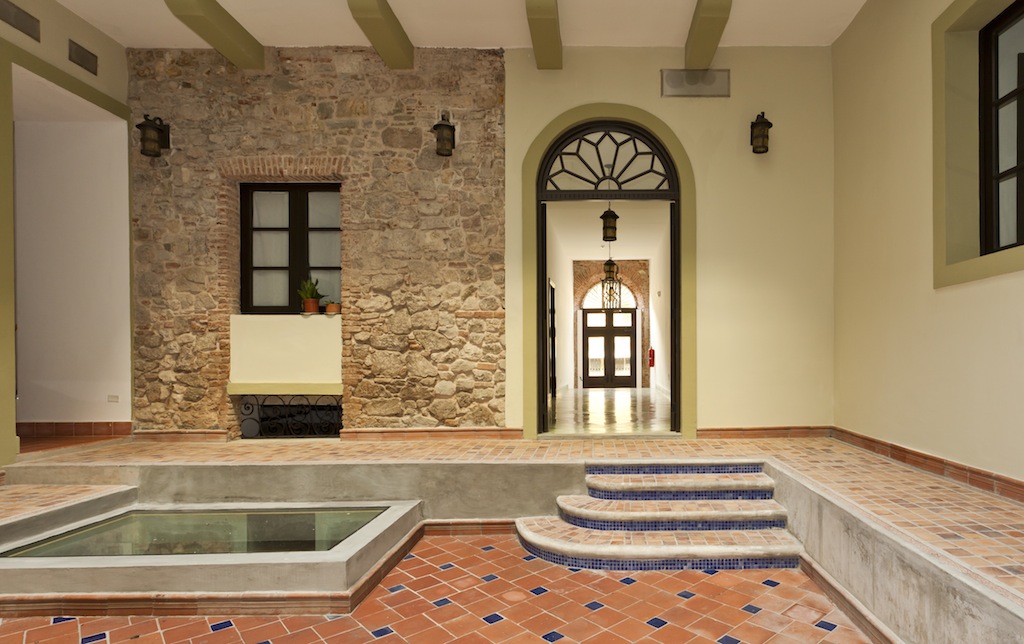 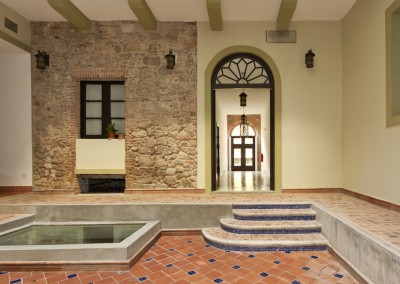 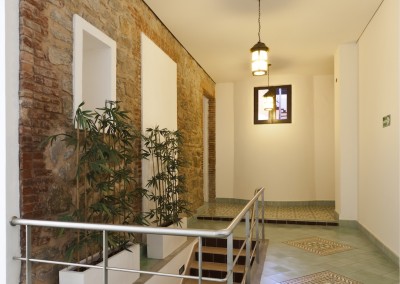 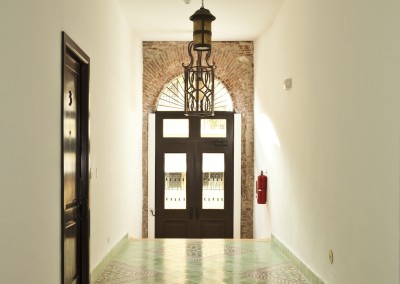 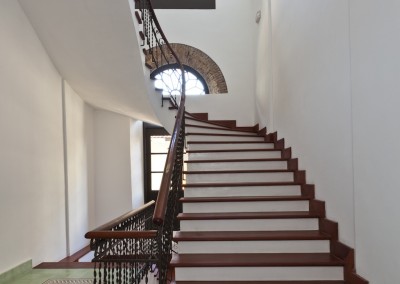 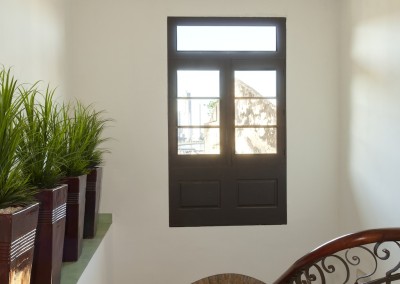 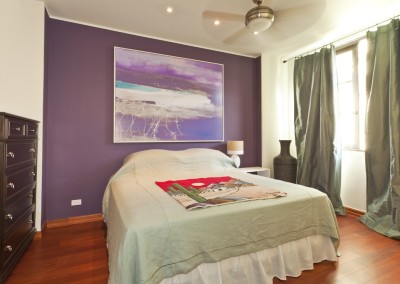 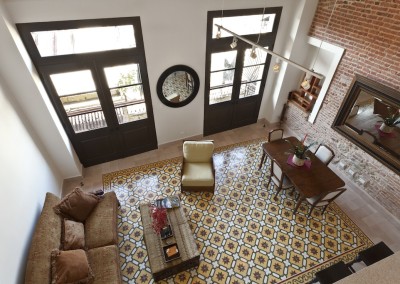 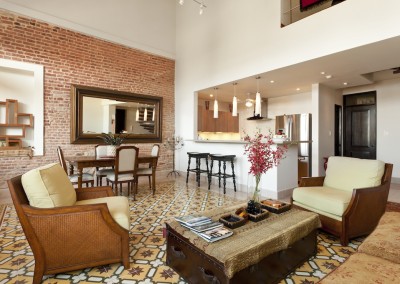 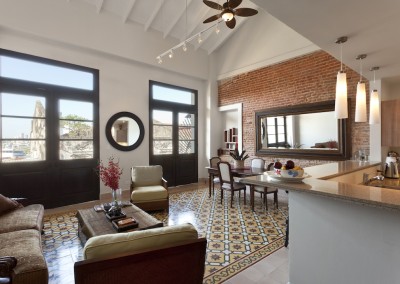 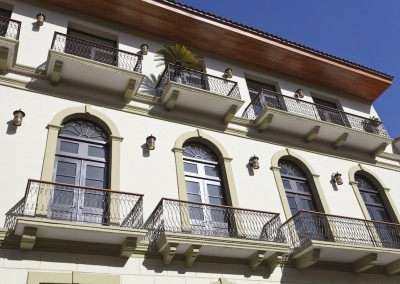 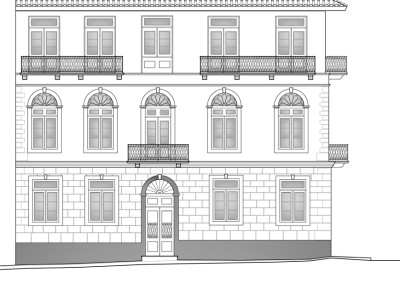 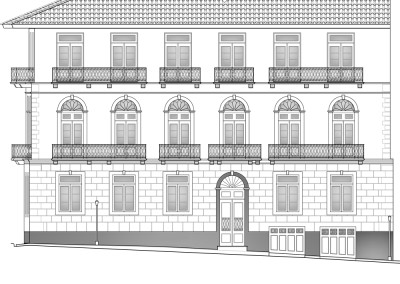 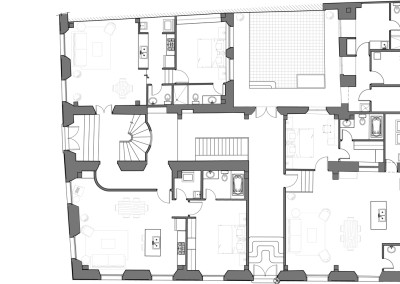 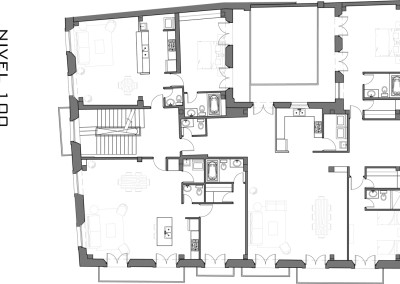 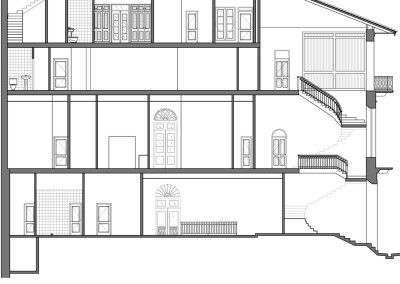