Why is Traffic so Congested?

It is five in the afternoon and we have just gotten out of work and are heading home, weary and itching to arrive at our destination as soon as possible. We study in our mind the options we have for our route and try to take the street that will lead us directly to our destination with the least stress possible. We gather our courage and start on our way, excited at not finding that much traffic in the beginning.Suddenly, all our courage and expectations are crushed by the tough reality: we have arrived at a collector road — say the Coastal Beltway, Calle 50, Boyd-Roosevelt, Via Tocumen, Transistmica — and things get complicated. We turn on the radio, start making lots of phone calls, and we get on Twitter to see if time goes by more quickly. Nothing helps calm the anxiety that increases when we see other drivers trying to outsmart each other, getting on the shoulder of the road, or the car in front of us that does not speed up on time at the traffic light. We start talking to ourselves:”Hey, step on it! Can’t you see it’s green?” or “Who taught you how to drive, your grandma?”And on and on until two hours later we arrive at the desired destination feeling even more tired and not wanting to do anything at all. 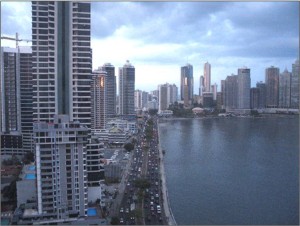 The keyword in all of this is “collector road”.   The kind of urban design we have been implementing all these years has been defined by the automobile and the routes it needs to take to make connections.  A collector road such as Via Tocumen receives many residential streets — say Villa Lucre, El Crisol, Dorasol, Brisas del Golf, Cerro Viento, and San Antonio — in its middle, as well as neighborhoods such as Don Bosco, Las Acacias, Pedregal, Mañanitas, and 24 de Diciembre at its point of origin.  All of these people have just one single option

to move from one point of Via Tocumen to the other.  When these neighborhoods were built, defined by private properties, the interconnection of alternate routes was not taken into account, and everyone as if drawn by a magnet used the cheapest solution, that of connecting the real estate development to the existing route, that is, the collector road.  Thousands of people are forced each day to use this route to be able to arrive at their workplace, but also to carry out any activities outside their homes.  The urban design of these neighborhoods makes it imperative to use an automobile for any mobilization outside the house.  Commercial and public services, as well as the boarding points for public transportation are also along these collector roads.  All of this exchange increases even more the chaos generated by the thousands of people trying to circulate through the congested roads.

There are new projects being built on the Southern Bypass — say Santa Maria and Costa Sur — that follow the same model of using the collector road.  Those projects have not delineated other solutions for access, and are being sold at elevated prices with the promise of a quiet and safe life outside the city traffic.  These suburbs are being interconnected to a bypass that has already collapsed, and I think it will be difficult for that promise of quiet to be fulfilled.

We have built two bypasses, a coastal beltway, vehicular bridges, and the traffic still has not disappeared.  This happens because we continue to promote the vehicular system dependent on collector roads, and we do not implement urban design policies that seek to create new interconnection models.  The subway will soon fall short if we do not create comfortable and friendly sidewalks, stops protected from the rain that allow us to make interconnections outside the traffic congestion, and new urban designs that allow citizens to live close to their workplace.  We need to discuss, with all sectors involved, real and viable solutions for the chaos in which we live.  The ones who should participate in this dialogue include the government, urban developers, business owners, sociologists, psychologists, architects, engineers, economists, and transportation specialists.  By joining our different opinions I believe we can start looking for and demanding a sustainable city model.

I think it is urgent to take action and I believe that those who are thinking of moving to urban developments that depend on collector roads need to start demanding viable interconnection solutions.  Pay attention: if your neighborhood only has one entrance and one exit, you will always be standing there waiting for your turn.

This site uses Akismet to reduce spam. Learn how your comment data is processed.